Big news, “Blue Bloods” fans! The hit police procedural drama has been officially renewed for its 13th season by the CBS Network.

The “Blue Bloods” crew took to Twitter to announce the show had been renewed for yet another season. “Grab a seat – the Sunday dinners continue. ‘Blue Bloods’ has been renewed for Season 13 and we can’t wait to have you join us!”

In a statement to The Hollywood Reporter, CBS Entertainment President Kelly Kahl revealed that “Blue Bloods” is officially returning. “American’s favorite first family of law enforcement is back for season 13. The Reagans possess an incredible bond with audiences literally everywhere and on every platform. And in its 12th season, with over 250 episodes, ‘Blue Bloods’ not only continues to dominate in the ratings but excels at an exceptionally high creative level.”

The Hollywood Reporter also revealed that “Blue Bloods” trails only “NCIS” (19 seasons) and “NCIS: Los Angeles” (13) in terms of longevity on CBS. “Blue Bloods” reportedly averages 9.81 million viewers per episode currently. It also ranks fourth among all the broadcast series this season.

“Blue Bloods” first premiered in September 2010 and now has more than 250 episodes. Starring in the series are Donnie Wahlberg, Bridget Moynahan, Will Estes, Tom Selleck, and Jennifer Esposito.

During a recent interview with TV Insider, Tom Selleck spoke about the show’s longevity and popularity over the years. “I never thought I’d be lucky enough to do a show that had that long a run. Maybe ‘Magnum, P.I.’ could have reached that number because nobody wanted to cancel it. I was the guy causing the divorce [by leaving to do movies].”

Selleck also said that the number of series that have done as many episodes as “Blue Bloods” is a tiny, tiny percentage. “This is a validation that we’re all fighting the good fight. All the actors are very committed to the work. So, it’s a number that gives reward for the professionalism of this entire cast.”

When asked why he believes “Blue Bloods” has continued to keep up with ratings, Selleck claimed, “Because it’s a character-driven show. The cop drama is a backdrop for the lives of the five main characters. The audience is so in the heads of these characters that the biggest jeopardy in our show is often when one of the relationships in the Irish Catholic family looks like it’s going south.”

In regards to which “Blue Bloods” episode is his favorite, Selleck shared it is “The Job,” which is Season 2, Episode 12. “You found out that Frank was in the World Trade Center’s North Tower on 9/11. It was quite stirring because 9/11 was still fresh in people’s minds. It was hard for me to be strong as an actor, not to break down because Frank is tougher than that.” 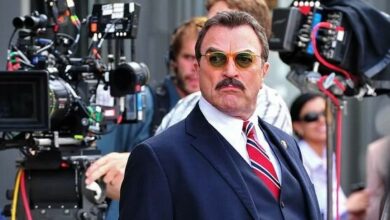 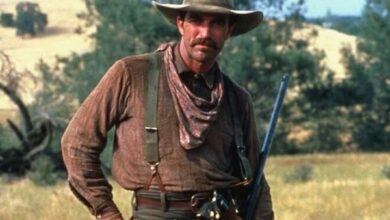 Here’s Why Tom Selleck Says He Got ‘Hooked’ on Westerns 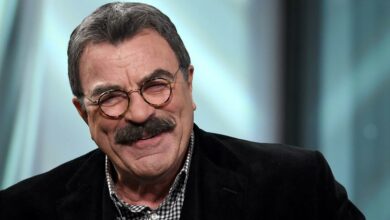 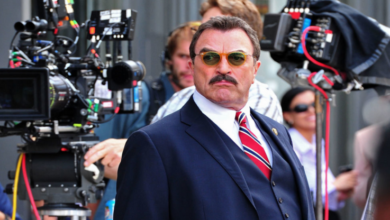