JOHN WAYNE movie The Quiet Man saw Duke’s genuine surprise at Maureen O’Hara’s whispered unscripted line that was captured at the film’s conclusion at director John Ford’s insistence. The bad-tempered filmmaker had to fight hard for the final cut to include this scene and Victor McLaglen’s fight, having cruelly baited the actor into a rage-fuelled performance.

O’Hara on the other hand, who broke a bone during production, refused to put up with Ford’s behaviour, firing right back at the “son of a bitch” when shooting another scene. The Quiet Man returns to US cinemas today for St Patrick’s Day, celebrating the 70th anniversary of the Ireland-set John Wayne and John Ford collaboration.

The 1952 Oscar-winning classic was considered by the director to be his sexiest movie and saw Duke’s retired boxer Sean Thornton making a pilgrimage to his home village in Ireland to claim his family estate during the 1920s.

There he met his match with Maureen O’Hara’s Mary Kate Danaher and her difficult brother Red, played by Victor McLaglen.

Shot in County Mayo and County Galway, the movie concluded with O’Hara whispering a line that Wayne was totally not expecting.

The scene in question saw the two waving goodbye before O’Hara said an unscripted line to Wayne which resulted in a double-take from him.

Initially, she refused to say the mystery words, writing in her memoir years later, “I couldn’t possibly say that to Duke!”

However, Ford insisted that she do it, so as to get the genuinely shocked reaction from her co-star, which totally worked.

Only those three knew what the line was and took it to their graves. Given that the director considered The Quiet Man to be his steamiest picture, presumably, it was something considered risqué in the early 1950s.

Of course, this scene and the final fight almost didn’t end up in the movie until Ford pushed for the final cut in his usual uncompromising manner.

Republic Pictures had insisted that The Quiet Man be no longer than two hours, believing that audiences wouldn’t want to sit in a cinema for any time beyond that.

At first, Ford refused, claiming he had trimmed all the fat and needed the nine minutes over, but the suits held their ground. So a few days later, he claimed he had the final print ready for screening when really it was his 129-minute cut.

After exactly two hours, the director signalled to the projectionist that the movie be stopped right in the middle of the big final fight between Sean and Red.

In the end, the studio executives gave in and let him have his extra nine minutes.

The fight itself was particularly powerful, given that Ford had purposely angered McLaglen the night before filming to get the best performance possible out of the actor.

The main cast of The Quiet Man (Image: GETTY)

At the time, McLaglen was in his mid-sixties and in poor health, meaning the fight had to be really carefully choreographed.

Wayne later shared that the scene was stylised with big swinging roundhouse punches over short ones that real boxers would go for.

Shot on the grounds of Ashford Castle in County Mayo, Ford’s son Patrick performed a stunt for McLaglen, when Wayne smacks him into the river.

However, the rest of it was the properly furious Red star.

In real life he was a former boxer who was actually quite agreeable, so Ford felt he seriously need to rile him up.

The night before filming the fight, Ford had McLaglen rehearse throwing his sister’s dowry on the floor.

In front of the actor’s son, the director lambasted him for a terrible performance and said that the shoot the following day would be useless.

Having fumed all that night, the Red star was right where the filmmaker wanted him, filled with genuine rage to be captured on film.

However, not all the other actors would put up with Ford’s manipulations including O’Hara who got him right back.

When filming the scene where Wayne finds O’Hara in his cottage, it was so windy that her hair kept getting in her face and making her squint.

Ford yelled at his leading lady to open her eyes, to which she fired right back: “What would a bald-headed son of a bitch know about hair lashing across his eyeballs?”

On top of this, O’Hara was suffering from a broken bone in her hand for much of the production.

In the scene where Wayne kisses her for the first time, she slapped his face.

However, his block caused the breakage.

And given the film was shot in order, she had to endure the pain without a cast to reset her bone. 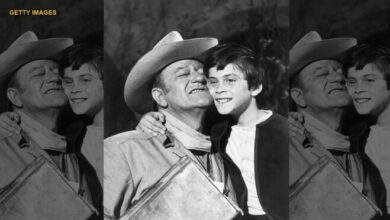 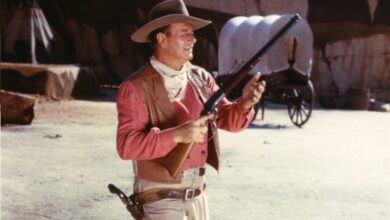 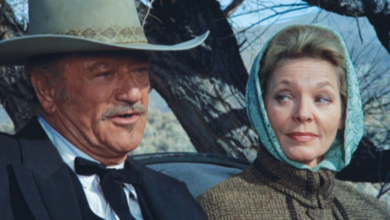 ”The Shootist”: John Wayne put all his heart into the final movie. 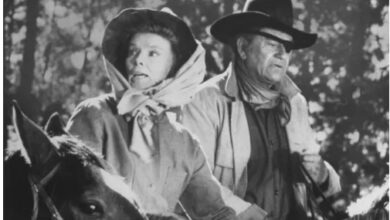