On the 65th anniversary of Funny Face, we run down the Givenchy girl’s best moments – from upstaging her (usually much older) leading men to literally representing heaven in a dazzling white cable-knit

This exotic MGM romance directed by Hepburn’s then husband, Mel Ferrer, was in fact her first big flop. Anthony Perkins plays a Venezuelan refugee whose life is saved by Rima the jungle girl: Hepburn in a suede pixie tunic, accessorised with a pet fawn and backed by a supporting cast in brownface.

Hepburn was by now really too mature for this sort of ingenue role; in a trashy Sidney Sheldon adaptation, she inherits a pharmaceutical empire and finds herself menaced all over Europe. Not as much fun as it sounds, but compensations include an all-star cast of suspects and an Ennio Morricone score.

Hepburn got top billing for the last time in Peter Bogdanovich’s lightweight indie-style romcom. There’s an hour of Ben Gazzara following her around the streets of New York before we even hear her speak, and the film was scuttled by the murder of poor Dorothy Stratten, one of Hepburn’s co-stars.

A Texas rancher’s daughter is revealed to be a Kiowa, leading to friction between her adoptive family, local bigots and the tribe demanding her return. Hepburn is basically miscast as a Native American in John Huston’s dour western; even worse, she broke her back in a serious riding accident during production.

Hepburn, in dazzling white cable-knit, literally represents heaven in Steven Spielberg’s remake of A Guy Named Joe, a movie guaranteed to make you blub. The star’s final film appearance was little more than a cameo, but what a cameo! Bonus points for donating her entire $1m salary to Unicef.

Well-meaning but dated melodrama adapted from Lillian Hellman’s play These Three, about two schoolteachers (played by Hepburn and Shirley MacLaine) whose lives are ruined when a pupil spreads a rumour that they’re lesbians. “The reason I chose Audrey is that she is so clean and wholesome,” said the director, William Wyler. “I don’t want bosoms in this.”

Hepburn plays the cello-playing daughter of a private detective who charms a millionaire playboy in Billy Wilder’s elegant, Lubitsch-like romcom set in Paris. But the 27-year age gap between the leads, exacerbated by Gary Cooper already showing signs of his terminal illness, proved discomfiting even for contemporary viewers.From the archive, 23 October 1964: A very fair lady indeedRead more

Julie Andrews fans were furious when Broadway’s original Eliza Doolittle was snubbed by the film’s producers, but Hepburn is a charming cockney guttersnipe and looks fabulous in Cecil Beaton’s costumes. Her songs had to be dubbed, though co-star Rex Harrison was allowed to sprechstimme his way through the musical numbers.

King Vidor’s literary epic, filmed in Italy, may not be the best adaptation of Tolstoy’s novel, but it has a fine Nino Rota score and beautiful cinematography by Jack Cardiff. The script is clunky and the acting is a mish-mash of clashing styles, but Hepburn gives a luminous star performance as Natasha.

Hepburn is enchanting as the chauffeur’s daughter in love with the son of her dad’s employers. Humphrey Bogart plays the brother who tries to scupper that match by wooing her for himself, but the 29-year age gap between them means Wilder’s romantic comedy seems a bit icky in hindsight.

Truman Capote envisaged Marilyn Monroe as the heroine of his novella, but the bowdlerised film role went to Hepburn, whom Photoplay had called “altogether un-Marilyn Monroeish”. Mickey Rooney’s Japanese caricature is a shocker, and I’ll never forgive Holly for dumping her cat in the rain, but Hepburn is an icon of timeless chic in her little black Givenchy dress.

Hepburn plays a typist hired to help a screenwriter (William Holden) meet his deadline in a deconstruction of movie cliches that was panned on its release. George Axelrod, the Charlie Kaufman of his day, wrote the screenplay, which is packed with in-jokes, genre riffs and superstar cameos, and Hepburn is surprisingly funny and sexy as a comic femme fatale.

What fun to see Hepburn hiding in a cupboard with an age-appropriate leading man at last. Peter O’Toole plays the debonair burglar she enlists to help her steal a fake Cellini statuette. Wyler’s cute Paris-set caper doesn’t reach the heights of Charade, on which it’s clearly modelled, but it’s worth seeing for Audrey’s ultra-mod Givenchy outfits and charlady disguise.

Hepburn’s best performances are the ones where she doesn’t appear to be acting, but the acme of her self-consciously “serious” work is the title role in Fred Zinnemann’s film about a Belgian nun whose faith is variously tested by nursing in the Congo, Peter Finch’s handsome but agnostic doctor, and the Nazi occupation of Belgium.https://www.youtube-nocookie.com/embed/SSRW-nxq3ak?wmode=opaque&feature=oembed

Hepburn plays a blind woman in this tense thriller that never quite transcends its stage origins. Alan Arkin hams it up as the villain trying to get his hands on a heroin-stuffed doll in her possession by dressing in wacky disguises.

In a turn up for the books, Hepburn is seven years older than Albert Finney, the actor cast as her husband here. She swaps Givenchy for groovy Carnaby Street gear in Stanley Donen’s astute relationship drama, cleverly scripted by Frederic Raphael, about an unhappily married couple driving south through France, with flashbacks showing the pair making the same journey in happier times.https://www.youtube-nocookie.com/embed/2vm2FdHg7Io?wmode=opaque&feature=oembed

“She was absolutely enchanting, and we said ‘That’s the girl!’,” said Wyler about picking Hepburn for the role that won her a best actress Oscar and propelled her to stardom. Princess Ann is so fed up with official duties she goes awol in Rome with American journalist Gregory Peck (only 13 years Hepburn’s senior), rides a Vespa and gets a gamine haircut.

A meeting of middle-aged movie legends; Hepburn is virtually the same age as Sean Connery, her love interest in Richard Lester’s bittersweet Robin Hood coda. Maid Marian is now an abbess, still miffed that Robin ditched her to go gallivanting off to the Crusades. Everyone is older but not necessarily wiser in this wry, elegiac romance with a heartbreaking denouement.https://www.youtube-nocookie.com/embed/S-Cs0jxxu_Y?wmode=opaque&feature=oembed

Hepburn plays a bluestocking bookseller who gets a chic makeover (though she looks perfectly chic to begin with) in Donen’s delightful musical. Fred Astaire, 30 years older than his leading lady, though still nimble on his pins, plays the Avedon-esque photographer who whisks her off to Paris for a fashion shoot. And the music is great: Think Pink! Bonjour Paris! Basal Metabolism!

It’s the best Hitchcock film that Hitchcock never made: Donen’s impeccable romantic thriller stars Givenchy-clad Hepburn at her most adorable, with Cary Grant (25 years her senior, but hey, it’s Cary Grant!) as the suave mystery man who saves her from MacGuffin-hunting thugs. No one flees for their life quite as prettily as Audrey, and Paris has never looked lovelier. 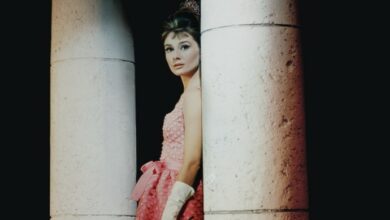 Audrey Hepburn Didn’t ‘Understand Why People Saw Her as Beautiful’ 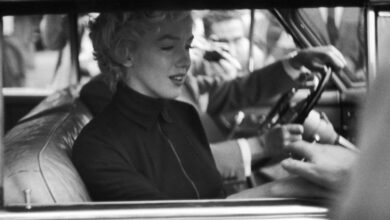 Tearful Photos from the Day Marilyn Divorced DiMaggio in 1954 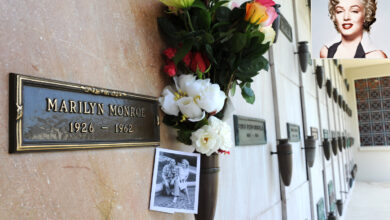 Where Is Marilyn Monroe Buried?