Actor John Wayne gave one of the best performances of his career in The Shootist. However, he didn’t initially agree with the original rough cut that director Don Siegel put together. Wayne demanded to reshoot a number of scenes, including one where his character shoots another man in the back. He refused to see his morals violated on the silver screen, even when playing a character.

Wayne played J.B. Books in The Shootist. He played many Western roles over the course of his career, but this one offered the most sentimental and introspective role of his career. J.B. is a notorious shootist with numerous deaths on his hands. However, everything changes when he discovers from a local doctor in Carson City, Nevada, that he has cancer.

J.B. decides to take refuge in a boarding house, but the host doesn’t initially welcome him. However, he plans to stick around and die in the most painless and respectable way possible. Hosts Bond Rogers (Lauren Becall) and her son, Gillom (Ron Howard), ultimately develop a connection with him that will forever leave an impression on their lives.

According to Scott Eyman’s John Wayne: The Life and Legend, there were several changes that Wayne wanted to make to The Shootist. He spent his entire career perfecting his on-screen persona that remains iconic in modern-day filmmaking. As a result, he refused to negotiate any element of that character’s moral compass.

“Duke agreed with the majority of the stuff he saw,” actor Hugh O’Brian said. “The only thing that startled him was the way Siegel had shot the scene with the guy played by Bill McKinney, the town braggart. Duke—or Duke’s double—shot him in the back as he’s trying to get out the door of the saloon. And when he saw that, Duke jumped up. ‘Wait a goddamn minute! I’ve never shot anybody in the back, and I’m not going to start now.’ ”

Wayne believed that this scene in The Shootist would “violate his reputation” with moviegoers. Siegel thought it was “ridiculous and senseless,” but he ultimately caved and agreed to let the actor have the reshoots that he found necessary. They reshot it to where McKinney was shot in the chest rather than in the back.

The actor had a list of scenes he wanted to reshoot

Siegel agreed to do any The Shootist reshoots that Wayne found necessary. However, the actor was still upset with the director for even including a scene of him shooting another man in the back. In response, Siegel asked if he would prefer another director to work with, which the actor ignored.

“Let’s shoot the dying scene first,” Wayne responded. “I’ll go over this list of shots you’ve made and make up my mind what we should reshoot.”

Siegel was careful with how he directed Wayne through the gunfight and death close-up sequences, which went smoothly. They reshot other scenes, as needed, which were less intense.

“The director and the producers were wise enough not to push Duke for a full day’s work,” Hugh O’Brian said. “They let him go home early because they wanted to finish the film.” 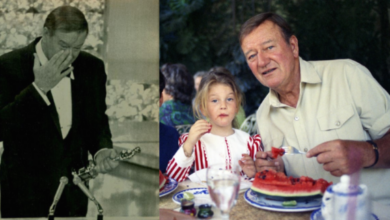 The last diary reveals: John Wayne doesn’t want to be an actor and likes a director .

The Տһootıѕt: John Wayne rides off into the sunset in a blaze of glory 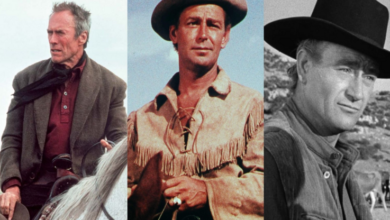