One of Hollywood’s most influential and profitable stars is back on screens this week as The Comancheros airs from 1.50pm on 5Action on Friday, July 23. The 1961 film follows Texas Ranger Jake Cutter, who while on a journey to find a group of outlaws, befriends an unlikely ally in a tough gambler. The Comancheros was a hit with critics, including Bosley Crowther, who described it as “so studiously wild and woolly, it turns out to be good fun”.

He added: “[T]here’s not a moment of seriousness in it, not a detail that isn’t performed with a surge of exaggeration, not a character that is credible.”

While a hit with the public, the film was tinged with sadness when its director Michael Curtiz, director of Casablanca and The Adventures of Robin Hood, was prevented from completing the film due to terminal illness.

This heartbreak saw Wayne take over as director, though in the final cut the role was uncredited, with Curtiz dying shortly after the film was completed.

Wayne himself was close to having his own near-death experience while on set, this time in the 1949 film She Wore a Yellow Ribbon.

The John Ford-directed film was reportedly difficult for Wayne as a result of the stunt, according to author of American Titan: Searching for John Wayne, Marc Eliot.

Eliot remarked that the cinch belt on Wayne’s belt had loosened while he rode a horse, which threw him off during one scene, where he’s seen waving his blue coat at the Native Americans.

“Hit my head. Blacked out. Now there’s about 50 horses tear-assing at me.

“I came out of the blackout to hear the Old Man, Mr Ford, yelling and there was general hysteria, but a wrangler with guts, he ran out and headed off the stampeding horses, which were within about a few feet of stomping me to death.”

Ford and Wayne worked in the movie industry together for 23 years, until the former retired in 1966, sadly passing away some seven years later.

The pair’s relationship withstood their time on set, and in one encounter Wayne even helped protect the director from embarrassment when he slipped going to collect an award.

By 1962, both were again working together on The Man Who Shot Liberty Valance, but at the time Ford was struggling with his health.

According to Closer News Weekly this year, Ford’s biographer, Scott Eyman, noted how during the film’s production Wayne was due to be given an award and he asked his director to present him with it.

He said: “Ford was announced to go introduce Wayne and he came up a couple steps to the dais and stumbled over one of the steps and slid right back down the dais. He recovered.

“He didn’t actually fall down, he got ahold of himself and went back up the steps and introduced Wayne.”

The biographer noted that when Wayne “came up the steps to the dais, he also stumbled over the same step on purpose, slide all the way back down”.

He continued: “The audience laughed thinking it was a setup between the two men.

“Then he came right back up and accepted the award. 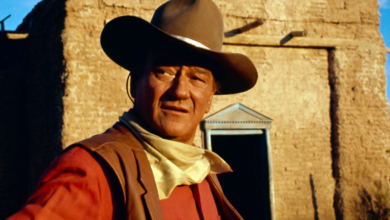 John Wayne shared he lost a large amount of his fortune? 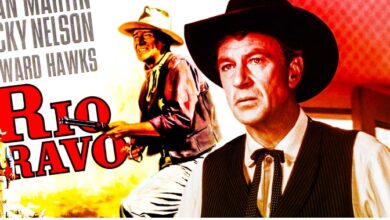 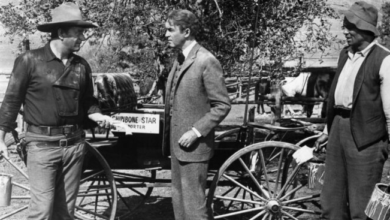 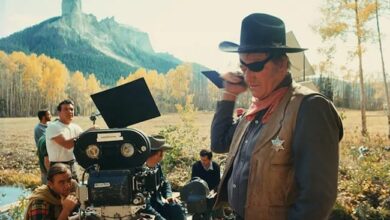 True Grit: John Wayne piled on the pounds, put on an eye patch and finally won an Oscar