Steven Spielberg has claimed he watches John Wayne Western The Searchers every time he’s preparing to film a new project. Of the 80 or so Westerns Wayne starred in, 1956’s The Searchers is arguably his most acclaimed. The story is simple with Wayne’s cynical, racist Civil War vet teaming with his nephew to rescue his kidnapped niece, who was grabbed during a Comanche raid. The dark storyline, stunning scenery and iconic moments such as the final image of Wayne’s Ethan framed in a doorway have seen it lauded as one of the greatest Westerns ever. Many filmmakers have cited The Searchers as an influence, with Spielberg especially taken by it.

Speaking with The Telegraph, the filmmaker revealed when he’s about to start shooting a new movie project, he rewatches The Searchers as a ritual. It’s been noted that the Barry abduction sequence from Spielberg’s Close Encounters Of The Third Kind is similar to the scene where Ethan’s – who MIGHT be Debbie’s father – doomed family prepares for the raid that sets the story off. Speaking further with AFI, Spielberg speaks of how Searchers director John Ford’s films “inspire” him, comparing his use of the camera to a painter. Given his deep love of The Searchers, it’s surprising the filmmaker hasn’t tried a Western – though one could still be in his future.

Spielberg is far from the first filmmaker to cite The Searchers as an influence. In terms of pop culture, its biggest inspiration was on Star Wars: A New Hope. The basic story – where a veteran warrior teams with a naive young hero to rescue a kidnapped woman – applies to both movies. Stylistically, Star Wars‘ use of vast desert landscapes connects to The Searchers, as does the shocking discovery of a burned-out homestead. Lucas’ film was a potpourri of cinematic influences and it also pulled from Akira Kurosawa’s The Hidden Fortress, making it a unique marriage of Western and samurai movie.

Alongside Citizen Kane, Scorsese listed The Searchers as one of his favorite movies (via BFI), and it was namedropped in his debut film Who’s That Knocking at My Door. The Searchers even influenced Breaking Bad. Creator Vince Gilligan told EW in 2013 that the ending where Walt can’t go through with his plan to kill ex-partner Jesse (Aaron Paul) and instead saves him, was heavily inspired by The Searchers. In comparing the endings, Gilligan said “A lot of astute viewers who know their film history are going to say, ‘It’s the ending to The Searchers.’ And indeed it is.”

Why Wayne Rejected A Spielberg Movie

Being such a fan of The Searchers, it’s little surprise Spielberg tried to work with Wayne too. Unfortunately, he decided to pitch the Western icon 1941, a zany comedy set during World War 2. The fiercely patriotic actor was offered a supporting role, though he swiftly rejected Steven Spielberg’s movie offer. Recounting Wayne’s rejection to EW, the director stated “He called me the next day and said he felt it was a very un-American movie, and I shouldn’t waste my time making it. ‘You know, that was an important war, and you’re making fun of a war that cost thousands of lives at Pearl Harbor.'” 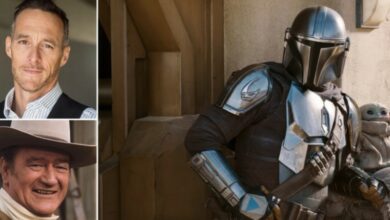 The Mandalorian : John Wayne’s Grandson does not ‘Think’ he’s ‘allowed to say’ how much he appears as Din Djarin . 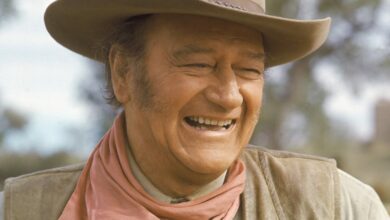 ‘The Beverly Hillbillies’: John Wayne Was Paid For His Appearance In Bourbon 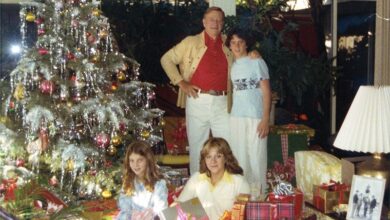 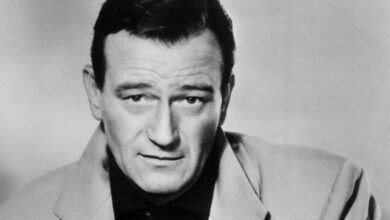