JOHN WAYNE’s tomb was meant to be inscribed with a heartbreaking message, a note not known about by the public for 20 years over fears his grave could be raided, unearthed accounts show.

Western legend John Wayne’s iconic turn in the 1969 classic True Grit airs today on ITV4 at 1.50pm. The Hollywood actor stars as the one-eyed US Marshal Rooster Cogburn, who is persuaded to track down a killer after a young girl finds out her father has been robbed and murdered. It is one of Hollywood’s most cherished westerns, and boasts an incredible cast, with the likes of Glen Campbell, Robert Duvall and Dennis Hopper starring opposite Wayne.

For his role, Wayne also won the Oscar his career demanded, collecting the Best Actor gong in 1970.

Wayne was already a household name, with the star going on to appear in nearly 150 films and TV productions during a long and distinguished career.

Cinema fans the world over were left heartbroken, however, when Wayne passed away aged 72 in 1979 from stomach cancer.

Those who had followed his career were unable to say their goodbyes after Wayne’s family decided to hide his grave’s location amid fears robbers could target it.

A report from Berra suggested that Wayne “wanted a Spanish epitaph engraved on his grave”, with the words “Feo, Fuerte, y Formal” placed on it.

This translated into English as “ugly, strong and dignified”.

He continued: “However, his children, Patrick and Ethan Wayne, left him in an unmarked grave.

“They didn’t want grave robbers or the public to crowd his resting place.

“It ran the risk of becoming a tourist spot or a shrine, which they didn’t want.”

Some two decades later, the Wayne family had a change of heart, and in the end placed a plaque on his grave, but not with the words he wished for.

Instead, they took a quote from an infamous Playboy interview he had made decades before.

It now reads: “Tomorrow is the most important thing in life. Comes into us at midnight very clean.

“It’s perfect when it arrives and it puts itself in our hands. It hopes we’ve learned something from yesterday.”

Married three times and divorced twice, Wayne had seven children in total, including his daughter Aissa, who once recalled her final encounter with her father.

In his final days, Wayne’s battle with stomach cancer became worse, and as he deteriorated, he was asked by Aissa whether he knew who she was.

He replied: “Of course, I know who you are.

Wayne coined the term The Big C in 1964, to describe cancer, years before he passed.

Wayne had his left lung removed as a result of his condition, as well as four ribs.

While he began his recovery well, he continued smoking and chewing tobacco, and sadly died just before the turn of the Eighties. 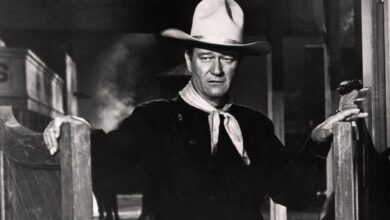 The Man who ѕһot Liberty Valance: In his final Western with John Wayne, John Ford subverts the myths of the Old-West that he himself created 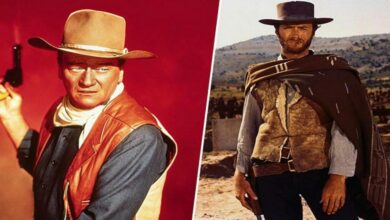 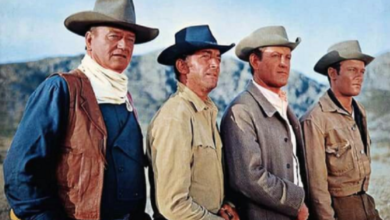 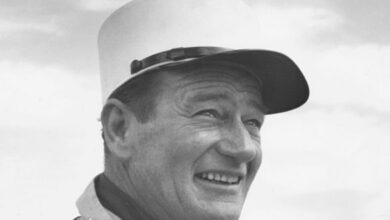