John Wayne spent much of his Hollywood career playing tough-as-nails characters. Many of The Duke’s portrayals came in westerns and war movies; sci fi movies like Star Wars weren’t part of his repertoire. Wayne’s grandson, Brendan Wayne, has a role in the Star Wars universe with his work in The Mandalorian. It turns out he’s following in his grandfather’s footsteps. Wayne’s weird voice cameo in A New Hope means he was the first Wayne to travel to a galaxy far, far away.

Wayne earned three Academy Awards nominations in his career. He picked up a win for best actor in 1970 for playing Rooster Cogburn in True Grit.

Yet neither The Alamo, which he directed and starred in, nor True Grit earned favorable ratings on Rotten Tomatoes. Twelve Wayne movies earned 100% scores on the Tomatometer, but Sands of Iwo Jima was the only one for which he also earned an Oscar nomination.

Star Wars Episode IV: A New Hope scored better than 90% with critics and fans on Rotten Tomatoes. He doesn’t show up in the credits, but Wayne has a voice cameo thanks to a sound designer who held on to audio snippets he no longer needed.

He doesn’t appear on screen, and we don’t hear his signature drawl, but John Wayne shows up in A New Hope. The Duke voices a crucial character and it was a complete accident, according to sound designer Ben Burtt.

“I always wanted to do an insect man – we didn’t really have an insect man come along until Poggle the Lesser [from Episodes II and III]. We had that character that looked kind of like a mosquito from the first Star Wars [Garindan] that we found we needed a sound for.

“[I] was wondering back a few months ago how I did it – because I keep notes and tapes – and I discovered it was an electronic buzzing which had come off of my synthesizer that was triggered by a human voice. And I listened to it and realized it was John Wayne – I had found some loop lines in the trash from the studio that had been thrown away. So the buzzing was triggered by some dialog like ‘All right, what are you doin’ in this town’ or something like that.”

Wayne’s voice cameo in Star Wars— looped and filtered through synths — shows up in Star Wars. He just doesn’t commandeer a stagecoach or call anyone pilgrim.

Stunt performer Sadie Eden played Garindan on screen, according to IMDb. Garindan is the character that alerts stormtroopers about Luke, Ben, C-3PO, and R2-D2 in Mos Eisley. The stormtroopers then attack the Millennium Falcon before it blasts off to Alderaan.

Like his grandfather, Brendan Wayne is part of the Star Wars universe. Unlike his grandad, this Wayne isn’t limited to weird voice cameos.

Pedro Pascal voices Din Djarin in The Mandalorian, but the younger Wayne is the person in the suit battling the mudhorn and tangling with a krayt dragon. He plays a key role on the show, and he channeled his grandfather to deliver the physical mannerisms.

At one point, Brendan Wayne resembled his grandfather too closely. During one headstrong moment, co-star Carl Weathers had to stop the scene when he started laughing at Wayne acting out the scene just like his grandfather.

John Wayne’s voice cameo in Star Wars was modified and filtered through synths. Meanwhile, grandson Brendan Wayne keeps the tradition going with his role in The Mandalorian. 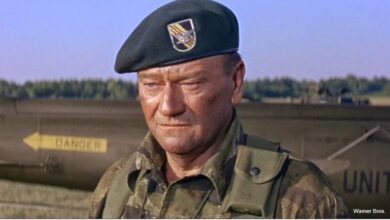 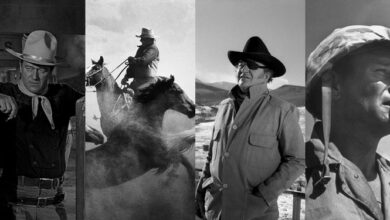 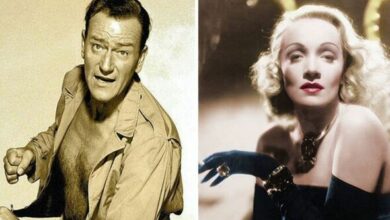 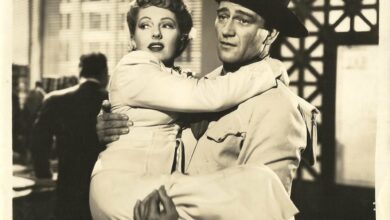 John Wayne and Constance Towers look at each other passionately in the 1943 movie.