The Green Berets actor John Wayne had an abundance of respect for those who put their lives on the line for the United States. This certainly became apparent in his movies, but it also bled into his personal life. Wayne once confronted some USC students heckling a young marine, which led to The Green Berets.

The Green Berets follows a cynical reporter named George Beckworth (David Janssen), who is against the Vietnam War. However, he is sent to cover the conflict and must tag along with a group of Green Berets. He meets a tough man named Col. Mike Kirby (Wayne), who leads the team through a top-secret mission. They intend to kidnap an important enemy commander, but nothing is as simple as it seems.

The Green Berets is a financially successful Wayne feature, but it didn’t settle as well with critics. The pro-war messaging offended a lot of reviewers. Nevertheless, his fan base continues to celebrate the passion that the actor had for veterans and the country overall.

Scott Eyman’s John Wayne: The Life and Legend takes a look at how The Green Berets came to exist. He explained that the “genesis” of the movie comes from an encounter that the actor had on the USC campus. The actor was on the college grounds to discuss a benefit for a children’s hospital and saw some students protesting the Vietnam War. However, an incident really got his blood boiling.

“What got my goat was that these students were heckling a young marine, a corporal, who was going by and heading for his car,” Wayne recalled. “He walked with his back straight as a rod, and he wore his uniform with pride. Then I noticed that where his right arm should have been there was only an empty sleeve which was neatly folded and pinned back.”

Wayne continued: “Turned out he was one of the Ninth Marine Brigade which were the first ground troops America sent to Vietnam. He had a chest full of medals and ribbons and said his drill instructor had taught him to ignore impolite civilians. He said, ‘You don’t give them the satisfaction of noticing them.’ I waved to him as he drove away.”

“And my blood was boiling,” Wayne said. “I ran over to the students and I was just so angry, I drummed my fists into their goddamn table and I said, “You stupid bastards! You stupid fing a**holes! Blame Johnson if you like, blame Kennedy. Blame Eisenhower or Truman or fing goddamn Roosevelt. But don’t you blame that kid. Don’t you dare blame any of those kids. They served! Jesus, the kid lost his arm. I mean what the hell is happening to this country?”

Eyman continued that the first “concrete sign” of Wayne’s The Green Berets was a letter written on December 29, 1965. The actor wrote to director George Stevens expressing his interest in making a feature film about the Vietnam War. He knew that Stevens’ son worked for the government and would need their help to make this picture possible.

“It will have the scope, integrity and dignity required by the subject matter,” Wayne wrote. “Our film about the exciting new unit fighting in Vietnam will be as American as ‘apple pie’ and as harshly against the ‘beard and sandal’ brigade as possible.” 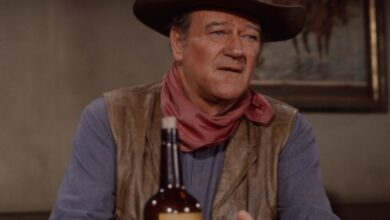 John Wayne Was ‘Hated’ and ‘Feared’ by Joseph Stalin, Who Wanted Him Assassinated 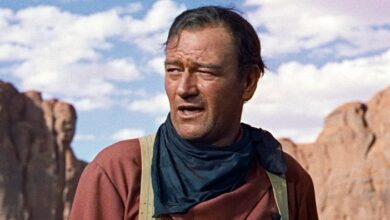 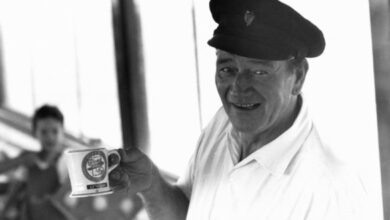 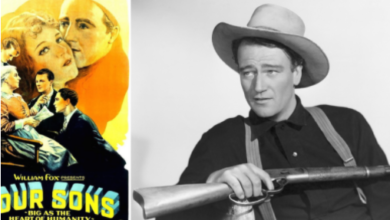 John Wayne stormed the scene with the movie Four Sons in a fit of rage .