The chemistry between John Wayne and Maureen O’Hara onscreen and their close bond behind the camera led many to believe that the two legendary actors were actually a couple. But were they?

The Start of A Friendship That Endured The Test of Time

Maureen O’Hara – who was new to Hollywood to make her American film debut as a leading lady in the romantic drama film, The Hunchback of Notre Dame in 1939 – met John Wayne through the renowned director John Ford. The two quickly became good friends, but their friendship grew deeper after Ford cast them in the 1950 romantic Western film Rio Grande. It was the first of five movies they would star in together. The Quiet Man, The Wings of Eagles, McLintock!, and Big Jake followed.

The Rumor That Never Dies

John Wayne has married three times, and his difficulty in remaining faithful has been known to many audiences. It was no surprise when many fans believed – even hoped for – that his onscreen love story with Maureen O’Hara continued behind the camera.

Well, sorry to disappoint, but they did not! It was something O’Hara and Wayne have consistently denied in many interviews over the years.

In 2000, O’Hara graced the Larry King Live, where she answered questions about The Duke. The actress revealed that Wayne described her as “one hell of a guy,” which she has always considered a compliment.

She also revealed that her husband, Charles F. Blair, was even good friends with Wayne for many years. Blair enjoyed playing chess with the actor, who would frequently visit their home.

John Wayne’s respect for Maureen O’Hara is beyond evident, and he often demonstrated it through his own words.

In 1979, Maureen O’Hara had flown in to speak before the House Banking, Finance, and Urban Affair Subcommittee on Consumer Affairs for a bittersweet mission. Her eyes were filled with tears knowing that her “dearest friend” for thirty-nine years was gravely ill. Still, she gathered all her courage and, in an emotionally riveting moment, gave her testimony for the President of the United States’ approval to strike a commemorative gold medal in John Wayne’s honor.

In 1978, John Wayne graced the Oscars, and fans got the shock of their lives when he appeared looking shockingly thin. His team had to apply so much makeup on him that Wayne ended up complaining. 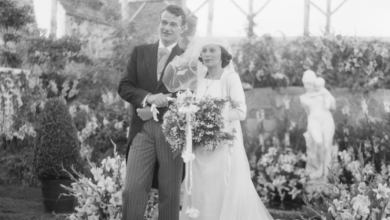 John Wayne Had 3 Wives, 1 ‘Nearly Shot Him’ to Death After He Came Home Drunk 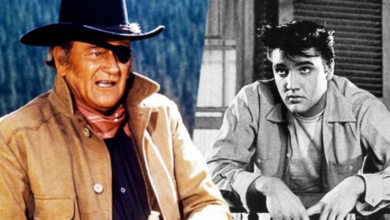 Elvis Presley has accompanied John Wayne , will the partnership hinder his career ?

Dressing Up as John Wayne for Halloween? You Could Get Some Love from His Estate