January 8th is a momentous day in the world of music as both Elvis Presley and David Bowie, the two big shots of popular culture, were born on this day twelve years apart. Not only that, the astrological twins had a lot in common apart from their illustrious careers.

For starters, one cannot overlook the striking similarity in the visual aesthetics that the two rockstars consciously choose to represent their on-stage personalities. Presley, who yearned to be a movie star as a teenager, absorbed all that he saw on the big screen. His flashy choice of clothing was heavily influenced by the movie stars whom he admired. Long before he stepped into the entertainment industry, he styled himself differently, paying attention to details such as applying eye shadow for a more intense look or combing his hair in a particular way. Presley became a celebrated sex icon of his times owing to his distinct style and appearance.

Bowie, on the other hand, emerged in the music scene during the 1970s, a time when the use of makeup and tight-fitting stage suits were already normalised by the likes of Mick Jagger and Jimmy Page. However, Bowie took it to another level with his varying stage personas such as Ziggy Stardust and the Thin White Duke. His extensive experimentation comprised rock-glam suits, red hair or sometimes sophisticated slicked-back hair, mimetic facial makeup with kohl and glitter.

This makes one wonder, what was the relationship between the two actually like? The answer is simple; It was a star-fan relationship where Bowie being the younger one, worshipped his icon, Presley. It so happened in 1972 that Bowie, despite having a fear of flying, crossed the Atlantic on short notice to witness a Presley concert in New York.

“[Elvis] was a major hero of mine,” Bowie once commented. “And I was probably stupid enough to believe that having the same birthday as him actually meant something. I came over for a long weekend. I remember coming straight from the airport and walking into Madison Square Garden very late. I was wearing all my clobber from the Ziggy period and had great seats near the front. The whole place just turned to look at me and I felt like a right idiot. I had brilliant red hair, some huge padded space suits and those red boots with big black soles. I wished I’d gone for something quiet because I must have registered with him. He was well into his set.”

Later in his life, Bowie nearly had a dream come true moment when he was asked to be the producer for Presley. The country star Dwight Yoakam, when asked about Bowie, with whom he shared the admiration for Presley, in an interview with the Orange County Register, he disclosed some unique information. According to Yoakam, Presley called up Bowie just six months before his death in 1977, asking Bowie to produce his new album. “That was based on Elvis having heard Bowie’s Golden Years, and I thought ‘Oh my God, it’s a tragedy that he was never able to make that’… I couldn’t even imagine 1977 David Bowie producing Elvis. It would have been fantastic. It has to be one of the greatest tragedies in pop music history that it didn’t happen, one of the biggest missed opportunities,” exclaimed Yoakam.

This wasn’t the first time Bowie missed such a coveted opportunity, but it was definitely the last and a very unfortunate one. Back in 1975, Bowie initially offered his song ‘Golden Years’ to Elvis Presley. Apparently, his wife was endowed with the responsibility of convincing Presley but became too shy and nervous to do so.

After Bowie’s death in 2016, yet another link with Presley was found in his farewell album ‘Blackstar’. In the search for meaning of his work, it was found that the album was inspired by an Elvis Presley song of the same name. Presley recorded the country-ish song in 1960 for a film but was ditched at the last moment and waited to be released till the ’90s. The lyrics of Bowie’s song are self-explanatory: “Every man has a black star / A black star over his shoulder / And when a man sees his black star / He knows his time, his time has come.” 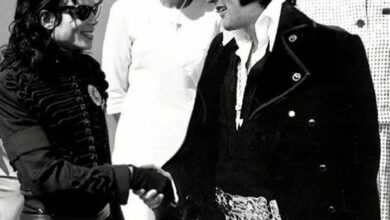 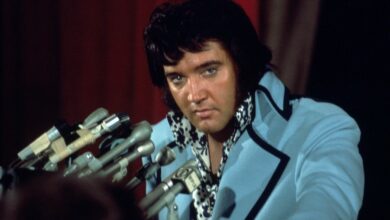