If I’m being honest, when choosing to settle down with a good old western, I usually choose to pick the more stylised, epic works of Sergio Leone or more grittier fare like Sam Peckinpah’s open exit wound of a movie, The Wild Bunch. However, it would be hideously remiss of me to ignore the more stately classics that forgore the blood and dust in favour of honour and dignity; furthermore it would also mean losing out on a sizable chunk of the filmography of the legendary John Ford and that of the Duke himself, the one and only John Wayne.
Arguably one the best of their collaborations (if not one of the best westerns of its generation) is The Man Who Shot Liberty Valance, a movie that fuses old school, six shooter heroics with a genuine attempt to bring civility to a lawless land.

A movie of staggering nobility, you wouldn’t be a million miles off suggesting that The Man Who Shot Liberty Valance is the Western equivalent of Casablanca. After all, both ultimately hinge on a cynical man who knows how to follow the rules of a lawless society who gives up his meager dreams in order to help a rival in love for a cause bigger than himself, but Ford weaves politics into the story to suggest that the act of bringing down a chronic ass-hat like Valance is imperative for cilivised life to get its first toe hold in a town like Shinbone – something that ironically is the very opposite of what the upright Stoddard is trying to achieve.
Both men, Stoddard and Doniphon, are forced to face ideals directly opposed to their cherished world views while Valance (played by the typically angry brows of a swaggering Lee Marvin) is a symbol of a time that has to pass if the world is to move on – even if it takes one last cold blooded act of the old world to galvanise it into being.
Wayne is almost a supporting player as he stares bemused at the idealistic Stoddard’s refusal to give up in the face of Valance’s petty tyranny, but he’s a perfect counterpoint to the passionate decency that James Stewart always seemed to project so well and it is he who is actually the gatekeeper who allows al.ost everything to occur even if it means that his way of life is slowly rendered obsolete by it. It’s a stubbornly subtle performance lurking under Wayne’s usual trademark bluster but it’s incredibly affecting as he plows the moral road in secret in order for the greater good to flourish.

However, despite giving us a western that contains precious little of the kind of action you’d usually expect to see from a movie with “shot” in the title, the movie ends up being riveting stuff and Ford loads the movie with eccentric townsfolk who are every bit as three dimentional as the leads. Be it Peabody, the drunkenly verbose newspaper reporter or Link, the cowardly marshal whose belly makes him look like a giant capital D, everyone has a part to play and even the smallest of roles has significance (hello Lee Van Cleef as one of Valance’s henchmen).

In fact, if you need even further proof as to how well The Man Who Shot Liberty Valance hits you right in the feels with its deadshot aim, it’s all there in the opening scene. As everyone sits by Tom’s coffin, we have no idea how any of them got here or even who the hell Tom actually is and yet you’re utterly gutted even before the film has truly started. If that wasn’t enough, John Ford ballsily tells us that no matter what we’re about to see, we’ll already know that both Stoddard and Doniphon will not only both survive but Hallie ends up with the younger man – and yet even though we know everyone’s eventual destination, we are still utterly hooked on their journey; now if that isn’t the mark of true storytelling genius, I don’t know what is….

At one point someone utters the legendary phrase, “when the legend becomes fact, print the legend”, which are arguably the most relevant words I’ve ever heard spoken in a Western (well, that and everytime Wayne calls someone “Pilgrim”), and that’s exactly what The Man Who Shot Liberty Valance is – the Old West forcibly dragging itself into the modern world off the back of it’s own legend – but when it comes to sheer, cinematic decency that’ll rock you to your emotional core, Ford’s classic can easily match Casablanca and To Kill A Mockingbird to the draw… 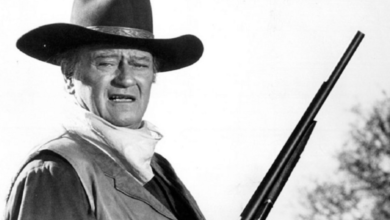 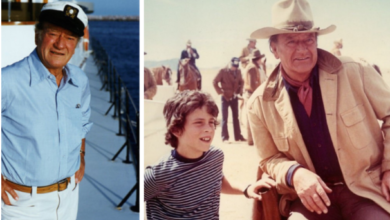 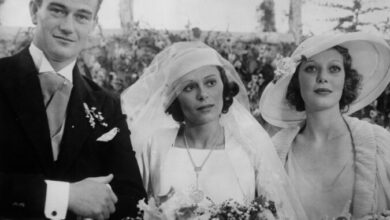