Western icon John Wayne had a legendary collaboration with director John Ford that lasted five decades and transformed both men’s careers. And late Hollywood legend James Stewart got to watch their dynamic up close.

Ford discovered Wayne, then Marion Morrison, when the latter was a University of Southern California student with a summer job on a studio lot. The two became friends, and Ford later gave Wayne his breakthrough role in “Stagecoach,” the film that launched Wayne to Hollywood stardom.

But Ford had a cruel streak, PBS reports, and it emerged on the set of his movies. In an interview given before he died, Stewart once described the toll that Ford’s meanness took on Wayne.

James Stewart Got to Know Both Men

But Stewart, an Oscar winner known for such timeless hits as “The Philadelphia Story,” “Vertigo” and “Mr. Smith Goes to Washington,” did not escape Ford’s sadism unscathed. He shared a story from the set of “The Man Who Shot Liberty Valance,” Ford’s 1962 film about an attorney (Stewart) who, robbed and left for dead by a notorious outlaw, is saved by a rancher (Wayne) and has to start over from scratch.

“In ‘Liberty Valance,’ a picture I did with Duke,” Stewart recounted. “The picture was about, oh, more than halfway finished. And Duke came up to me one day and said, ‘How’s it come that you’ve gone through this whole thing and you’ve never been at the bottom of the list? What is it… what’s the idea?’ And I said, ‘I don’t know!’”

“And I didn’t know,” Stewart added. “But I must say I got a little smug about it. And I went on, and it went around the company: ‘Stewart has never, he’s always right up there.’”

Stewart Had His Own Run-In with Ford

The day before the movie finished shooting, the cast was preparing to do the funeral scene. As James Stewart explained it, Woody Strode, the actor who was playing Wayne’s character’s best friend, was part of the scene. And he was dressed in blue overalls, a blue work shirt and boots. As they were preparing to shoot, Ford came up to Stewart and asked, “What do you think of Woody’s costume?”

Stewart said that he didn’t like it. And according to the actor, Ford froze, then walked away. Then he asked someone to blow a whistle, which they did, and he called out, “Everybody, would you please gather around?” So they did. Then he asked Stewart to come over. And he said loudly, “We have an actor here who objects to the costume on Woody Strode.” He then proceeded to suggest that Stewart was prejudiced – Strode, who also has since died, was African-American – and added that he just wanted to share Stewart’s objection to Strode’s costume with the whole cast.

“I wanted to crawl into a mouse hole,” Stewart recalled. “And I looked at Duke Wayne, and he was beaming like a cat that had just eaten the mouse… And Duke came over, and said, ‘Well, welcome to the club. I’m glad you made it.’” 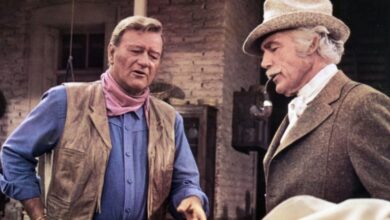 The reason John Wayne once yelled at one of his co-stars on the set of ‘Chisum’. 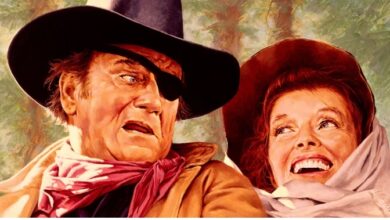 Where Was John Wayne’s Rooster Cogburn Filmed? All Locations 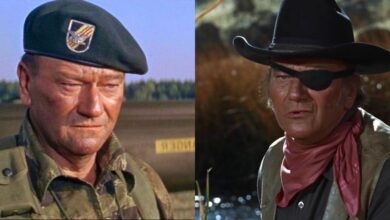 Dressing Up as John Wayne for Halloween? You Could Get Some Love from His Estate