Martin Scorsese revealed his passion for “The Searchers” early in his career. In his first feature film, 1969’s “Who’s That Knocking at My Door,” the main character, J.R. (Harvey Keitel, playing something of a Scorsese avatar), spots a pretty girl reading a French magazine, and uses that to make small talk. After all, he recognizes the man on the cover: John Wayne. He gets especially excited talking about one John Wayne movie, “The Searchers,” a western that he talks about at length. When the punk gangsters of 1973’s “Mean Streets” con some kids out of twenty bucks, they drive out to go see “The Searchers.” Even “Taxi Driver” draws heavily from it.

“The Searchers” was a western that came late in the career of director John Ford, whose movies were markedly different from what Scorsese would go on to make. Their big open skies and cheery Irish-Americana were directly opposed to Scorsese’s gritty, urban, rock-and-roll-scored crime movies. Where Ford found freedom in the dazzling beauty of Arizona’s Monument Valley, Scorsese made cinematic poetry out of the dimly lit tenements in Manhattan’s Lower East Side. But both filmmakers used their movies to explore similar ideas of America: a society of immigrants, a society built on violence.

The evolution of John Wayne

“The Searchers” played to Scorsese as an evolution, or even a culmination, of earlier movies that Ford had made with John Wayne. Before he paid attention to who got the director’s credit, his focus was on the movie stars. John Wayne, gun-toting, slow-talking western hero, led the charge. Going to these movies repeatedly, Scorsese “began to realize what a director did … translate ideas into images.”

Ford and Wayne had had a complicated artistic relationship stretching back decades, to when Ford hired the UCLA grad as a prop manager in the late 1920s and then refused to cast him in anything until 1939’s “Stagecoach.” Over the decades, their working relationship became the stuff of legend, directly influencing Scorsese’s own long-term collaborations with Robert De Niro and Leonardo DiCaprio. Wayne led many Ford projects, shining in westerns as the tough-but-tender face of white manifest destiny in 19th century Indian Territory. It wasn’t until “The Searchers” that the tender side of the equation was totally scraped off, leaving only a violent man who refuses redemption.

In his “Personal Journey Through American Movies,” Scorsese notes the frightening nature of the shift, next to Wayne’s portrayal of the sweet outlaw Ringo Kid in “Stagecoach” and the genial old Cavalry officer in “She Wore a Yellow Ribbon.” There was something to be said for the honesty of “The Searchers'” approach.

Once they were making movies, it didn’t take long for Scorsese and most of his New Hollywood peers to strip “The Searchers” for parts. Nevertheless, the imagery of its opening moments, as Ethan Edwards (Wayne) rides into his brother’s Texas farmstead, retains its power. The lazy pace of the cutting, as the family goes onto the porch to meet with this lonely figure, does little to suggest the doom on the horizon.

Edwards departs the next morning with Sam Clayton (Ward Bond, another Ford regular) and nephew Martin (Jeffrey Hunter) on a routine search for their neighbors’ cattle, and he returns to see the farmstead burned down by Comanche. His family has been killed. But he and Martin have reason to believe that little Debbie (Natalie Wood), implied to be Ethan’s daughter, is still alive, in the camp of Comanche Chief Cicatriz, or Scar (Henry Brandon). Martin and Ethan go on to spend the next seven years seeking out Debbie, finding worthless clue after worthless clue before they eventually make contact.

With a premise like that, the movie could have been a simple western potboiler with good white men going up against bad Native Americans. Indeed, that was how it was received by much of the public on its release, with the New York Times’ review calling it “a rip-snorting western.” But it complicates that premise from the beginning, as Ethan continually belittles his partner Martin for being “one-eighth Comanche.” Scorsese would go on to call Ethan “one of the most unsettling [characters] in American cinema.”

Ethan’s violent nature — from his fighting for the Confederacy years before, to his shooting out the eyes of a dead Comanche so his spirit is left to “wander between the winds” — is far from heroic, and more in line with Travis Bickle, the racist, homicidal protagonist of Scorsese’s 1976 film “Taxi Driver.”

When Quentin Tarantino asked Scorsese about the “Who’s That Knocking At My Door” scene in 2019, he said he “had to do it.” As the characters talk about “The Searchers,” J.R. gets most excited about a scene that comes near the end of it, where Ethan meets with Cicatriz. J.R. notes that Cicatriz is a nasty figure, but that John Wayne is too, euphemistically referring to the same realization that Scorsese had. In “The Searchers,” the scene is tense, a cross-cultural exchange between men who protect their home and men who invade it, told from the perspective of the invader. It’s a scene that’s found its way into many Scorsese movies, from “Gangs of New York” to “Casino” to “Silence.”

Even more Scorsese movies borrow from “The Searchers'” eternal ending: Ethan, having rescued Debbie, returns home, but stays back at the doorway. The implication of exile reverberates throughout many of Scorsese’s movies, in the nightclub routine of “Raging Bull” and “Wolf of Wall Street’s” infinite, dead-eyed seminars. But it’s the character of Ethan Edwards, unsettling, unfit for society, and deliberately, challengingly unsympathetic, that influenced Scorsese the most. 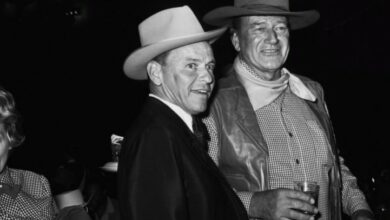 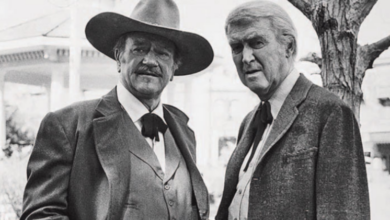 Revealed why John Wayne turned down the ‘non-American’ role after seeing the script. 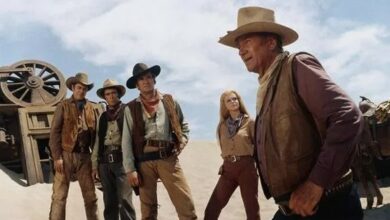 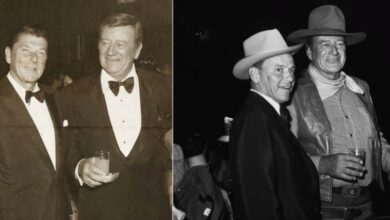 Why John Wayne Denounced Frank Sinatra And President Kennedy During The Red Scare?